Gaia-5G is a laboratory for experimentation located in the Computer Science Faculty in the University of Murcia. Its research purposes are focused on the area of 5G technologies with virtualization and backhaul infrastructure for the Wireless connectivity, including 5G, LoRaWAN and 802.11p self-managed infrastructure that allows experimentation in different fields.

Gaia-5G is located in the city of Murcia, in Spain. The core infrastructure is located in two different buildings (ATICA and the Computer Science Faculty), but there are more devices deployed on different parts along the Campus, as the Luis Vives site. 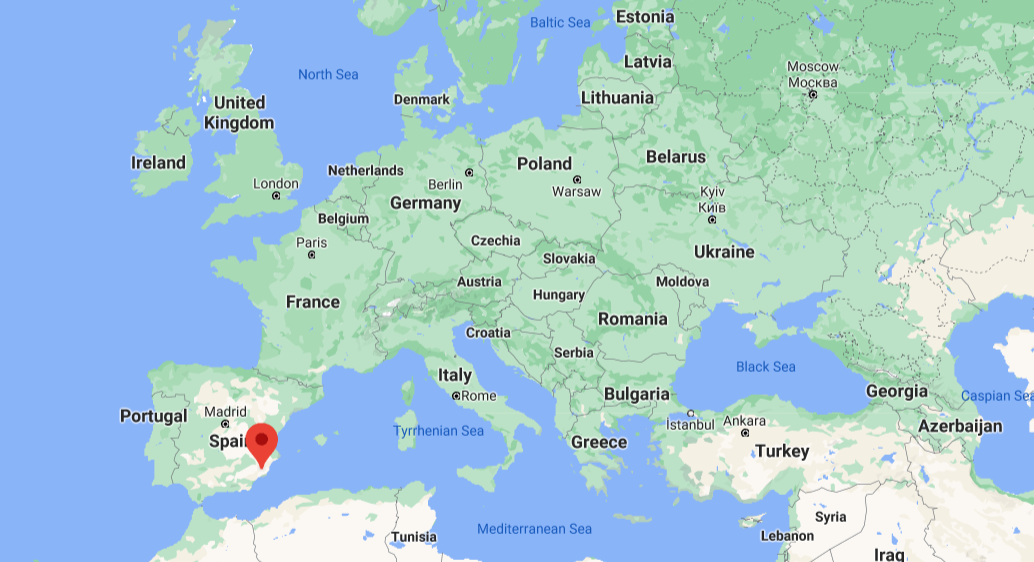 Gaia-5G laboratory counts with a network infrastructure based on CWDM which provides a bandwidth of 10 Gbps fully available and customizable with QinQ/802.1ad allowing the isolation of different traffic. MEC functionality, including the virtualisation of edge devices. SDN is provided thanks to two Delta AG7648-R with the latest PiCOS operating system in the core and HPE 2920 for leaf nodes switches supporting OpenFlow technology, in addition network programmability is granted by two barefoot Tofino-powered switches EdgeCore WEDGE100BF-32X-O-AC-F and Stordis BF2556X-1T-A1F. Connectivity between OpenFlow enabled switches and Programmable switches (P4) work at 6x40Gbps while programmable switches can work up to 100Gbps.

The laboratory is currently equipped with a cloud platform which hosts core network components, as well as SDN, NFV and MEC deployments. Two OpenStack are deployed; rocky, a full-fledged deployment offering 160 vcpus (Intel(R) Xeon(R) Gold 6138 CPU based) and 512 GB RAM splitted into two compute nodes one on each side and queens, a lightweight deployment offering 12 x86_64 vcpus (Intel(R) Xeon(R) CPU E5-2603 v3) based with 48 GB RAM and some ARM RPI 4 nodes with 4 vcpu each (Broadcom BCM2711B0 quad-core A72 based) and 8GB RAM each. Hyper-Converged Infrastruture with a 4-node cluster with 128vCores and 4TB RAM and two edge clusters providing 24vCores and 512GB RAM each is also available for extending the VIM capabilities. OSM is the chosen orchestrator for providing NFV. 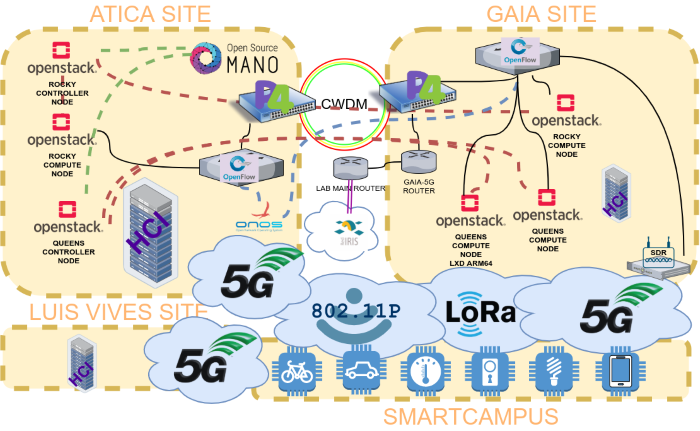 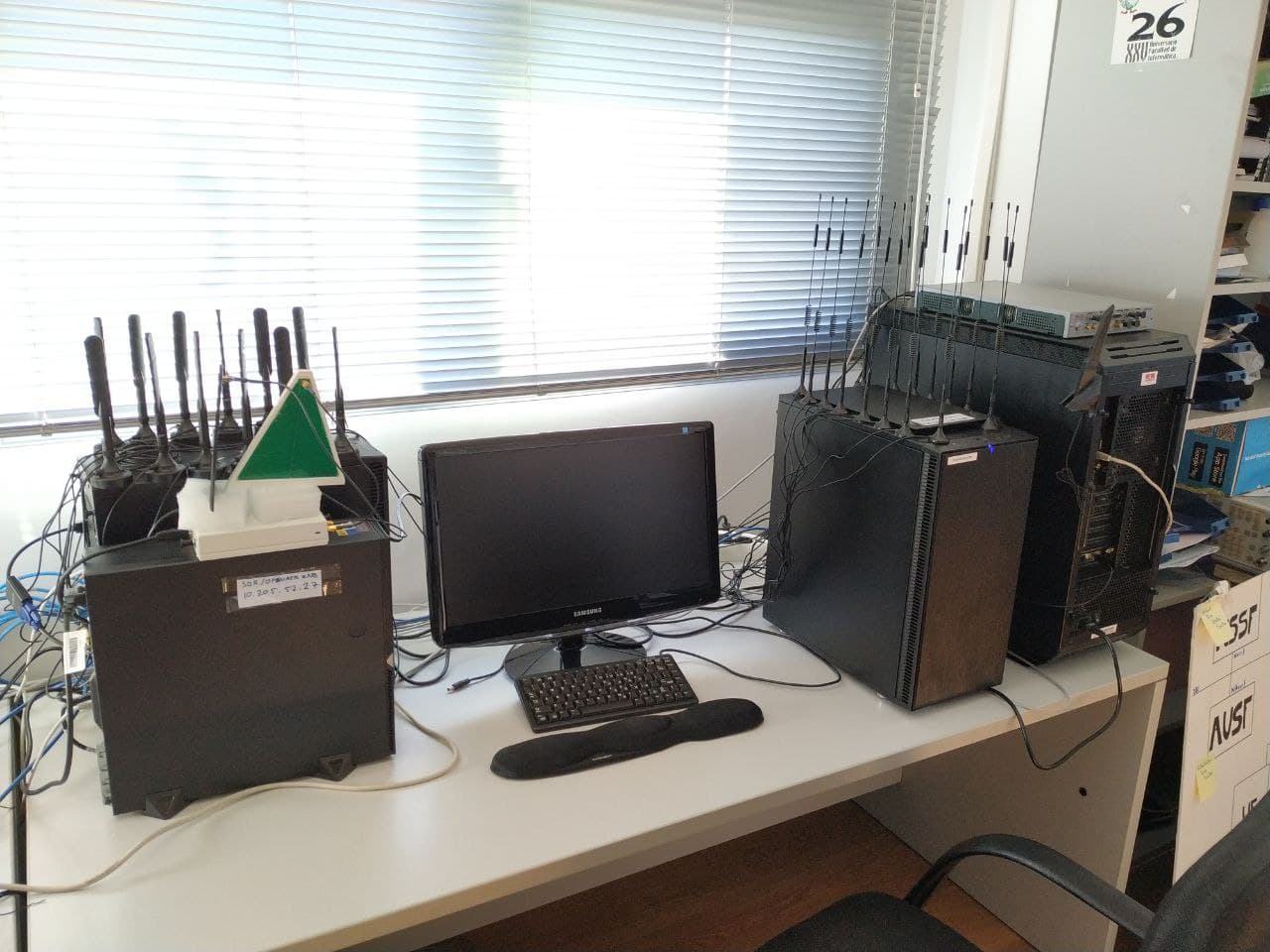 Besides, a commercial core has been recently acquired from Amarisoft with the associated RAN hardware and both systems are being fully integrated for having a completely functional and multi-site 5G solution. The deployment consist on two sites located in the Campus of Espinardo of the University of Murcia, and two cores are available, one turnkey solution by Amarisoft, and an experimental one which can implement multiple open source 5G cores.

Gaia-5G also has LoRaWAN capabilities based on the 868MHz band. At the moment, the infrastructure relies on a Kerlink iStation gateway, located in the Luis Vives bulding. This gateway is connected to our own deployed LoRaWAN network server (Chirpstack), the received data is also forwarded to The Things Network LoRaWAN network servers. In the future, it is planned to deploy two more gateways in the campus, in order to achieve full coverage of the Espinardo campus and also to cover Murcia area. Also, NB-IoT could be integrated into the platform provided by external providers . 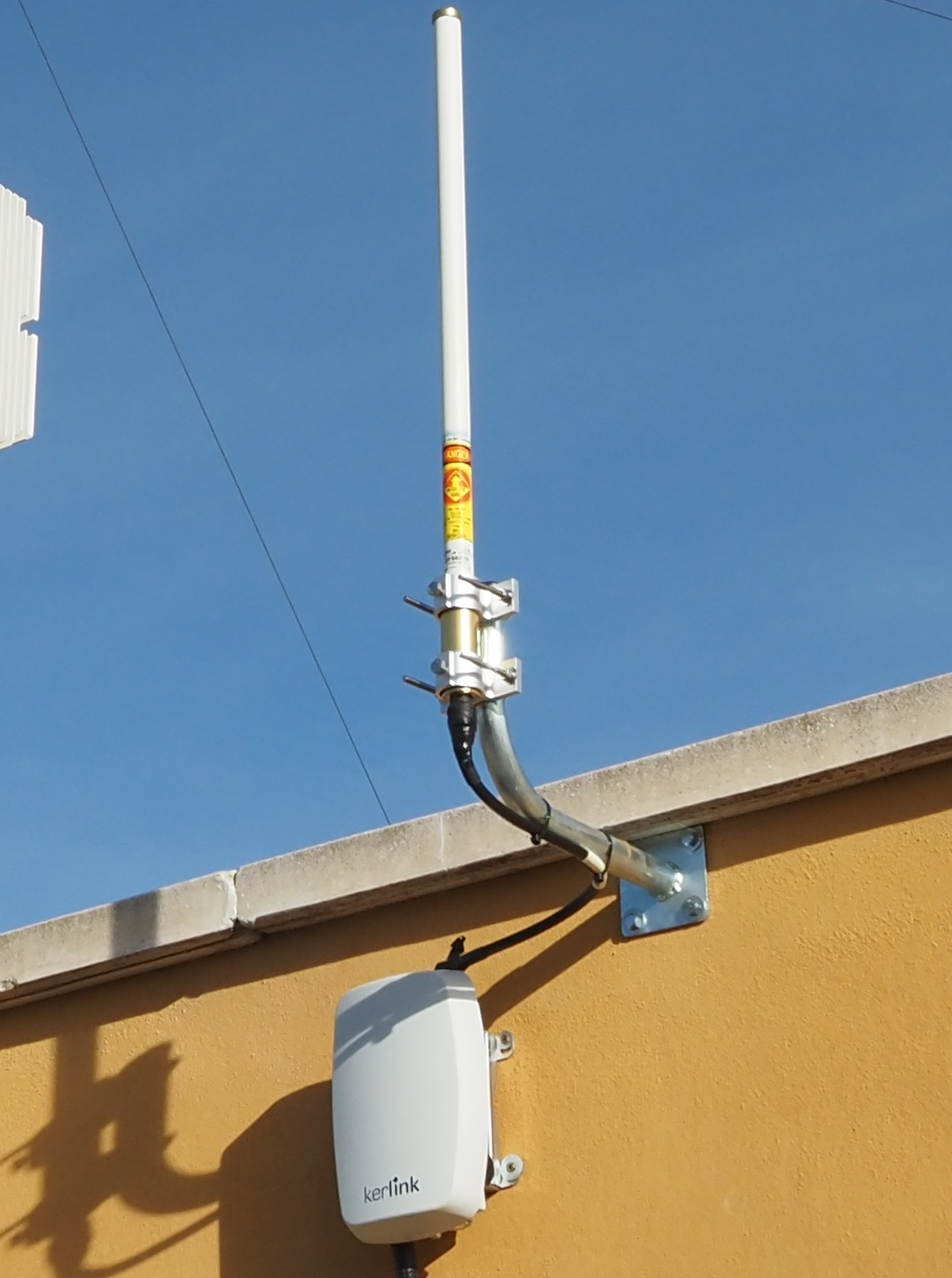 To complete the multi-access infrastructure, 802.11p networking is available with dual role (RSU/BSU capable PCEngines APU3d2 devices) units which can be deployed alongside Espinardo campus on demand for vehicular experimentation integrated in the current infrastructure. 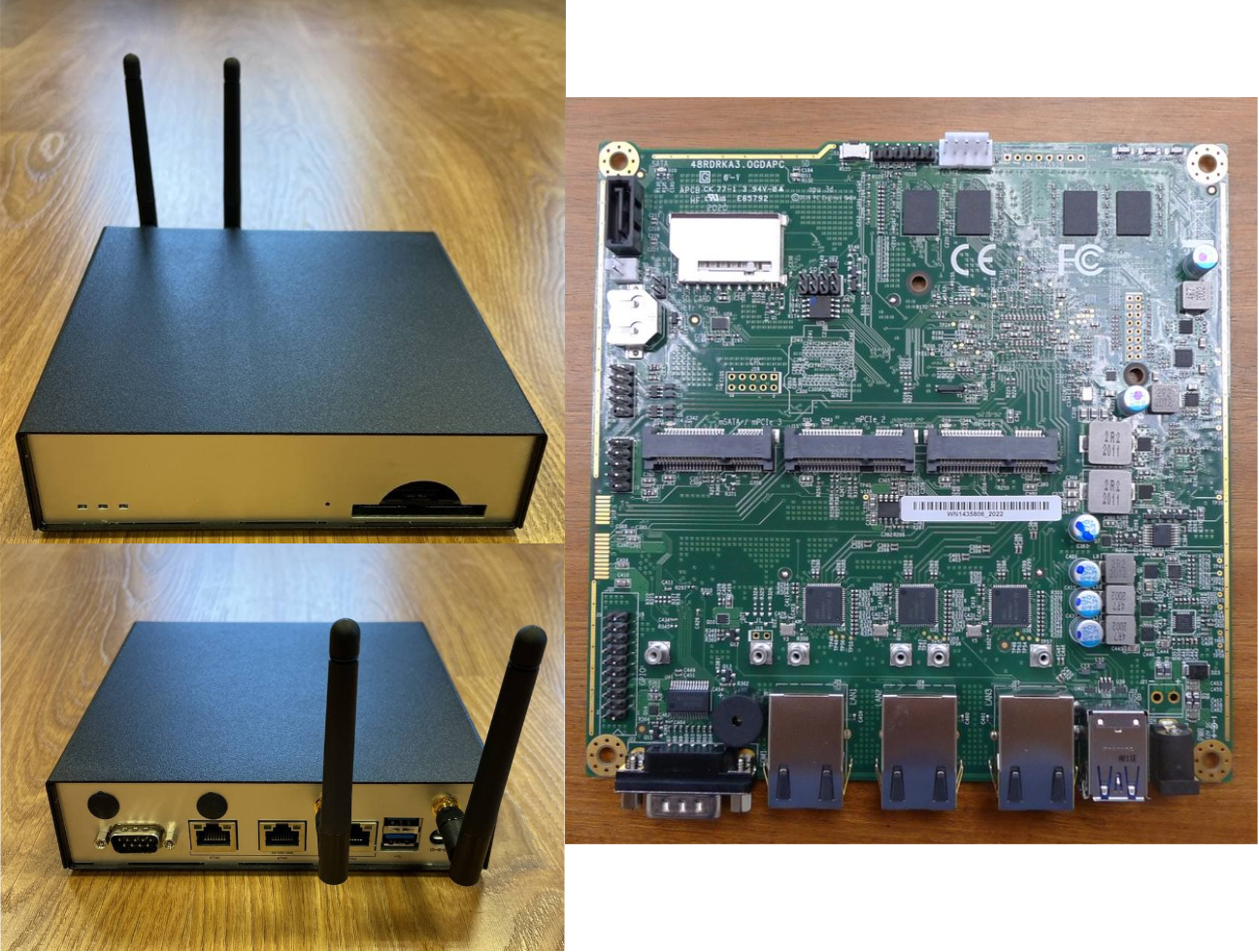 The preliminary 5G coverage plan of the two installed sites is approximately as shown in the next image. 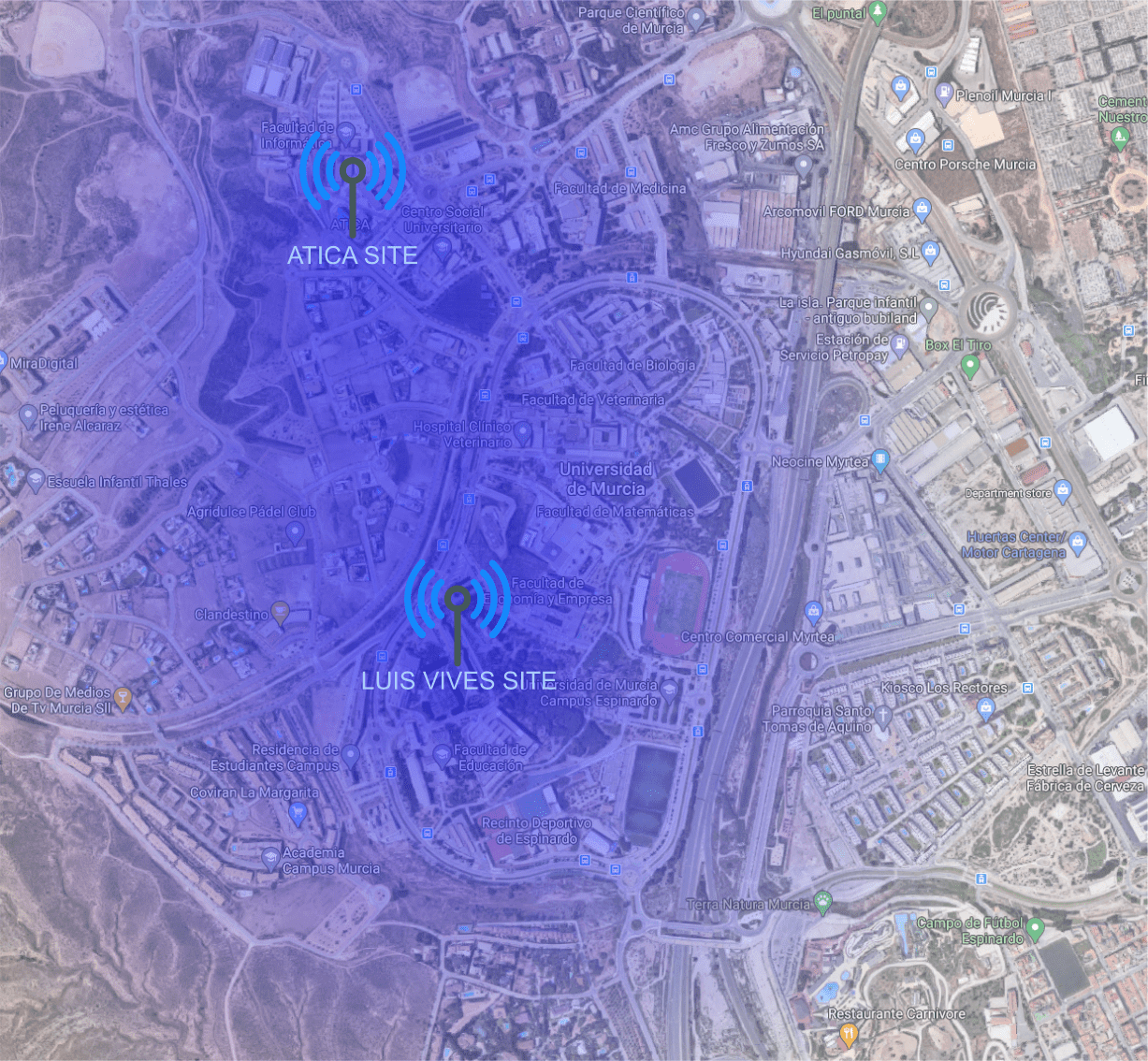 Once the three LoRaWAN gateways are installed, the expected coverage is the following, as simulated using Radio Mobile Online. 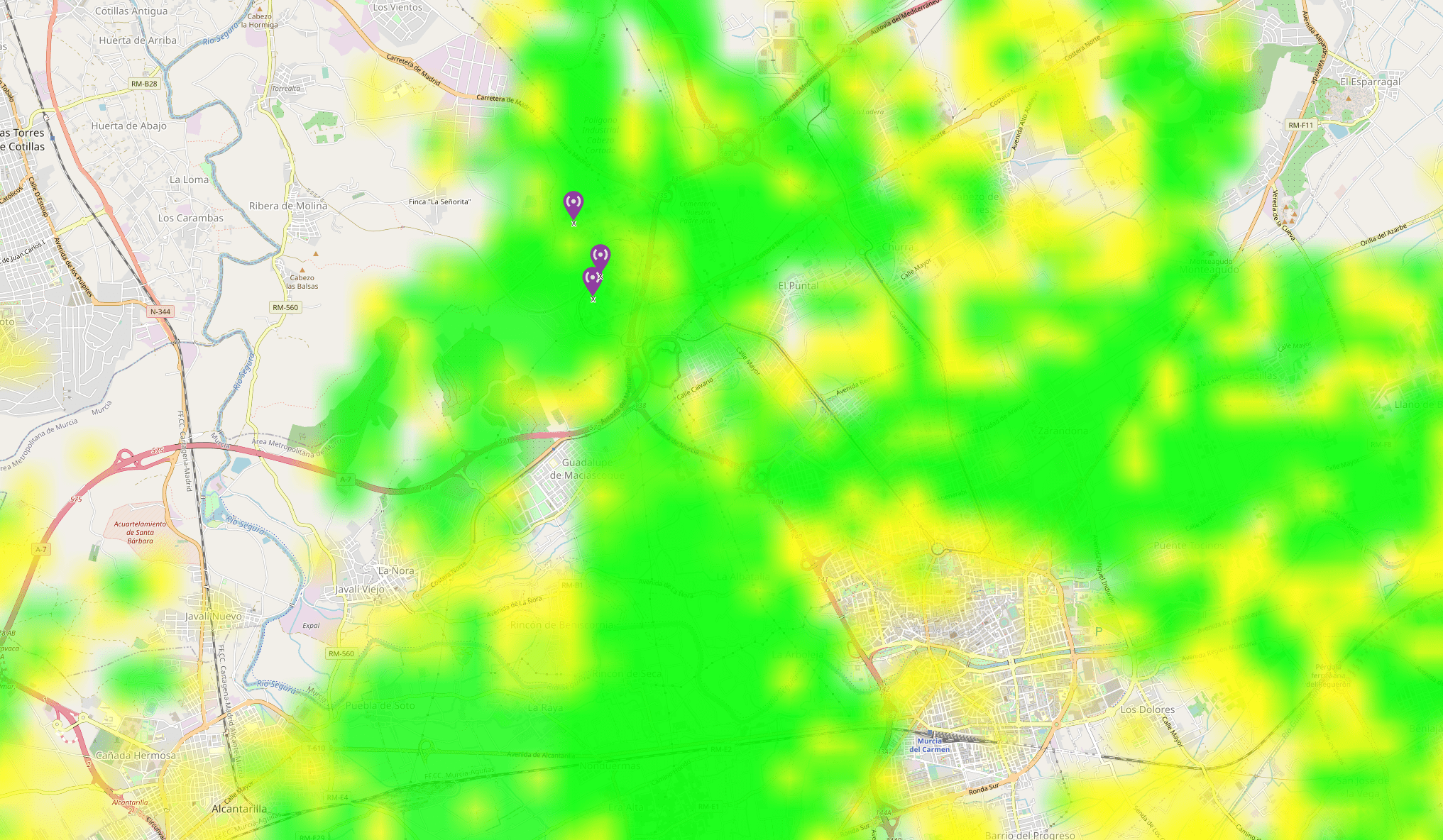